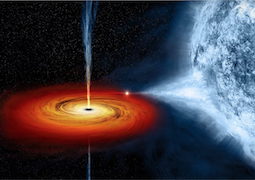 X-ray binaries are stellar systems consisting of a star and a stellar remnant such as black-hole, neutron star or a white dwarf. When material from the star (or donor) is falling onto the stellar remnant (or compact object) it is heated to temperatures of several million degrees and produces copious X-ray emission. In this process we may also observe jet-like colimated outflows or wide-angle winds of highly ionized plasma. The properties of this emission depend on the conditions close to the compact object and therefore can be used to study the behaviour of matter under the influence of strong gravitational fields. In addition the properties of the binary stellar system (e.g. parameters of the two objects and their orbit, long-term evolution) depend on the past of the two objects. Therefore, X-ray binaries are very useful laboratories for studies of the properties of compact objects and stellar evolution.

Our group has a deep interest in observational as well as theoretical studies of X-ray binaries. In our work we use X-ray data from all major operating X-ray telescopes: Rossi X-ray Timing Explorer , Chandra X-ray, Observatory, XMM-Newton, NuSTAR, as well as, supporting multiwavelength data from the Hubble Space telescope, and ground-based telescopes. We study individual sources that exhibit interesting or unique characteristics, populations of X-ray binaries, as well as their integrated X-ray emission and their connection to the stellar populations they are associated with.  This way we can measure the formation rate of X-ray binaries, the demographics of the compact object populations, and their dependence on the age and metallicity of their parent stellar populations.

The observational data are combined with state-of-the-art X-ray binary population synthesis models in order to understand their formation and evolution pathways and their connection with gravitational wave sources and short γ-ray bursts.

In particular our research is focused on the variability of the X-ray emission as a means to understand the nature of the compact objects in X-ray binaries and the properties of the accretion flow. The vast majority of X-ray binaries with massive companions harbour X-ray pulsars. The detection of pulsations from an accreting X-ray source provides one of the strongest evidence that the compact object is a neutron star. X-ray pulsations result from the misalignment of the neutron star spin and magnetic axis. Gas is accreted from the stellar companion and is channeled by the magnetic field on to the magnetic poles producing two or more localized X-ray hot spots. As the neutron star rotates, pulses of X-rays are observed as the hotspots move in and out of view. The change in the neutron star rotation velocity (spin-up or spin-down) allows measurements of accretion torques, which can provide a measure of accretion rate and magnetic field.

In addition we use multi-band (photometry, spectroscopy, and polarimetry) observations of X-ray binaries to study the nature of their donor stars, their orbital parameters and address their long-term variability. We combine these observational data with theoretical models of the emission from the accretion flow and jet outflows in order to obtain a better understanding of the physical processes which take place in those extreme environments.

The current generation of X-ray telescopes offer us a very clear picture of the X-ray source populations in nearby galaxies. This allows us to study for the first time in detail the populations of X-ray binaries in a large number of galaxies in our local Universe and obtain a more clear picture of their properties and their dependence on star-formation and galactic parameters.

At present, the origin of the hard X-rays emitted by black hole binaries is controversial. There is general consensus that the hard X-rays result from inverse Compton of low-energy photons, presumably coming from the accretion disk, by high-energy electrons. However, the physical nature and the geometry of the Comptonization medium is still under debate.  Black hole binaries  exhibit relativistic jets at low/medium X-ray luminosity. We propose that the Comptonization medium is the entire jet. Our jet model has been able to explain many timing and spectral properties of black hole binaries. Currently, we work to improve the model to explain even more challenging results resulting from X-ray observations.