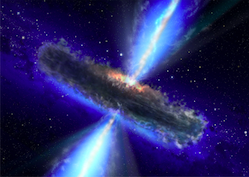 Active Galactic Nuclei (AGNs) are the manifestation of accretion of material onto the supermassive black-holes (from several millions to several billions times the mass of the Sun) found in the centers of galaxies. The result of this accretion is the production of intense radiation over the whole electromagnetic spectrum and often the ejection of material in the form of collimated relativist jets or larger scale, mild outflows.

By studying the broad band (from Radio to Optical to X- and Gamma-rays) images and spectra of AGNs we can learn about the physics of super-massive black-holes and the physical state of the material surrounding them and which are experiencing extreme physical and dynamical conditions. In addition, AGNs are among the most distant sources of radiation in the Universe, and have been found up to "redshift" larger than 6, when the Universe was only 1 billion year old, less than one tenth of its current age. Therefore, by deeply surveying large portions of the sky and collecting multi-wavelength data from large sample of AGNs at different "redshift" we can study the growth of the supermassive black-holes over cosmic time and their connection to galaxy formation.

Our group focuses on different aspects of the AGN phenomenon:

To perform these studies, we use astronomical data obtained with a wide suite of space observatories operating over a broad wavelength range, such as the: Chandra X-ray Observatory (X-rays), XMM-Newton (X-rays), Rossi X-ray Timing Explorer (X-rays), Spitzer Space Telescope (Infrared), Hubble Space Telescope (Optical/UV), FUSE (UV). We also use data from ground-based optical and infrared facilities, such as the Skinakas Observatory.

We also use active galactic nuclei as a tool, within the SMILE (Search for MIlli-LEnses) project.  By means of  Very Long Baseline Interferometry (VLBI) data of a complete and large sample of radio loud active galaxies, we search for gravitational lens systems with angular separation on milli-arcsecond scales. Lenses responsible for such compact lens systems are expected to be compact objects with masses in the range 106 to 109 solar masses, as for example dark matter halos on sub-galactic scales, whose abundance is one of the critical prediction of the standard cosmological (Lambda-CDM) model.