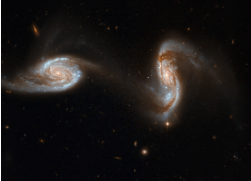 Galaxies are the places where stars form and spend their lives. They exhibit a wide variety of morphologies and colours which in general terms reflect their past history. Hence studies of galaxies provide information on the formation of stars over the history of the Universe and the growth of the super-massive black holes residing in their nuclei. Galaxies are very dynamic systems which often collide and merge to form new systems. These interactions depend on the local environment of each galaxy and therefore studies of galaxies can provide information on the evolution of the Universe as a whole

Members of IA have a deep interest in understanding the properties of galaxies and their evolution. In particular we focus on studies of:

Studies of interacting galaxies are very important since they were very common in the early universe and are responsible for its current picture. In addition, galaxy interactions often trigger vigorous star-formation and are responsible for activating the super-massive black holes present in the centers of the interacting systems (ie. Psychogyios et al. 2016, A&A, 591, 1). Hence, they play an important role in the formation of the stellar content of the Universe and the growth of galaxies and their massive black holes. We have been studying galaxy interactions mainly using infrared observations obtained with the Spitzer Space Telescope and Herschel Space Observatory, and we look forward to new data to be obtained with JWST. The infrared radiation can penetrate through the dust which is ubiquitous in those galaxies and hence these data can give us a clear picture of the star-forming activity and the activity due to their supermassive black-holes. In addition, we use observations obtained with other ground and space based telescopes (e.g. Hubble Space Telescope, GALEX, Chandra) in order to obtain a more complete picture of their activity and its connection to the interaction process (Torres-Albà et al. 2018, Privon et al. 2020) .

B. Star clusters in galaxies

Studies of individual stars and star-clusters in nearby galaxies mainly with the Hubble Space Telescope give us a picture of their history. Based on these data we can decipher when the stars in each area of a galaxy were formed, which in turn gives us information on the processes that shaped the present picture of a galaxy. In addition, we can obtain crucial information on the mechanisms of star-formation and the factors which affect them. This information is also important for understanding their populations of X-ray binaries and supernova remnants (see Larson et al. 2020 and Linden et al. 2021)

C. The most energetic galaxies in the nearby Universe

During the late 60's and the beginning of the 70's it was discovered that many galaxies that were bright at optical wavelengths, were even brighter in the infrared (IR) range of the spectrum. All of these galaxies, regardless of the internal processes that generate their IR luminosity (whether it be star formation or AGN activity), showed more intense emission towards longer wavelengths with a maximum in the mid- and far-IR. However, it was not until the late 70's when it was confirmed that this radiation was due to ultraviolet and optical emission, which is absorbed, processed and re-emited at IR wavelengths by interstellar dust. This type of IR-bright objects caught the interest of the scientific community, and the first ground-based mid-IR photometric studies of large samples of galaxies with intense processes of star formation were carried out. It was also at this time that some works showed the role of interactions in triggering the star formation activity in the nuclei of IR-bright galaxies. With the launch of the Infrared Astronomical Satellite (IRAS) in 1984, these systems were detected in large numbers and were classified based on their IR luminosities, basically in the so-called luminous and ultra-luminous IR galaxies (LIRGs and ULIRGs respectively). These systems are ten to hundred times more luminous than our own Galaxy but they are not very common in the local Universe and only represent a small amount of the total IR emission of the nearby Universe. Nowadays the importance of LIRGs and ULIRGs in the grand scheme of galaxy evolution has been evinced by the IR luminosity functions in the local universe and at high-redshift. The Spitzer Space Telescope has provided new insights into not only local but also high-z (z>0.5) LIRGs and ULIRGs. Several cosmological surveys have demonstrated that the majority of IR-selected galaxies at z<1 are in the LIRG class and that ULIRGs make an important contribution to the IR galaxy population at high-z. Our group works in these topics as a partner in the Great Observatory All-sky LIRG Survey (GOALS) collaboration, a project that combines imaging and spectroscopic data from NASA's Spitzer, Hubble, Chandra, and GALEX space-borne observatories in a comprehensive study of over 200 of the most luminous infrared-selected galaxies in the local Universe. Our studies focus mainly on:

D. Star-formation and AGN activity in the local Universe

Our group leads a study of the star-forming activity in a representative sample of galaxies in the local Universe. The goals of this project are to: (a) compare different methods for measuring the star-formation rate and address the factors that influence these measurements (Mahajan et al., 2019); (b) measure the connection between recent and past star-forming activity in galaxy-wide as well as sub-galactic scales (Maragkoudakis et al. 2017); (c) study the connection between star-forming activity and AGN activity (Maragkoudakis et al. 2018). In this effort we use multiwavelength data from a broad suite of space and ground-based observatories including Skinakas Observatory. In addition we develop advanced tools for the characterization of activity in galaxies (Stampoulis et al. 2019).

According to the current scheme describing galaxy evolution, elliptical galaxies are the end-points in galaxy evolution, forming when the galaxies have converted most of their gas into stars, often during intense interactions. Recent deep observations of elliptical galaxies show that they exhibit ubiquitously structures that are tell-tale signatures of interactions that took place several billion years ago. Our group is very active in developing methods for the identification of these structures and studying their connection with past merger activity of the galaxy (e.g. Bonfini et al. 2018).

In addition, our group has pioneered the use of the spatial distribution of globular clusters as indicators of past merger activity (Bonfini et al. 2012), and more recently it is heavily involved in systematic studies of the identification of non-uniformities in the globular cluster distribution in elliptical galaxies in the Virgo cluster (D’ Abrusco, Fabbiano & Zezas, 2015).