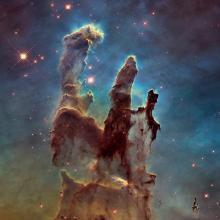 Dimitra Rigopoulou completed her undergraduate studies in Physics at the Univ. of Ioannina (Greece) in 1990 and moved to the UK where she completed her MSc and PhD in Astronomy at the Queen Mary University of London in 1991 and 1995 respectively. Her thesis was entitled "Multiwavelength studies of Ultraluminous IRAS Galaxies"

She worked as postdoctoral researcher at the Max-Planck-Institute for Extraterrestrial Physics (MPE), Garching (1995-1996) and as a Marie Curie Fellow at Imperial College (1997). From 2003 until 2008 she was a staff scientist at MPE. In 2008 she moved as a faculty at Oxford University (UK) where, since 2014 she is Professor of Astrophysics and a Stipendiary Senior Fellow at Lady Margaret Hall, Oxford. Since 2008 she holds a joint appointment between Oxford and RAL-Space, STFC and since 2019 she is a Hasselblad Professor at Chalmers University. She became Fellow at the Institute of Astrophysics in October 2019.

The primary interests of Prof. Rigopoulou are on Galaxy Evolution and Star-Formation in Galaxies. For may years she has investigated the physics of the energy source in Luminous Infrared Galaxies near and far. These objects are the `lighthouses' in the Universe as they harbour some of the most extreme sites of star-formation. For her research Dr. Rigopoulou uses both imaging and spectroscopy, in particular studying the rich mid-and-far infrared spectra of star-forming galaxies. She is interested in spectral signatures that allow us to study how star-formation proceeds, investigate the presence of an AGN and how the two phenomena co-exist and often interact in the same galaxy. Dust is an integral part of her studies as the most actively star-forming sites in a galaxy are often hidden from our view by copious amounts of dust. For her research she uses ground based (ALMA, IRAM/NOEMA, VLT, SWIFT) and space based (Spitzer, Herschel and soon JWST) facilities. She is also interested in future facilities that will come online in the next couple of years/decades. She is currently a member of the HARMONI Science Team (one of the first light instruments of the E-ELT). In the past she has lead a study into ALMA Band 11 and the European Infrared Space Roadmap. She is also a member of the Science Team for the Origins Space Telescope (OST).