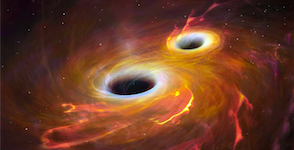 IA-FORTH is a partner of the Total-Coverage Ultra-Fast Response to Binary Mergers Observatory (TURBO).

The project, which commences in 2022, is funded by NSF (Award: 2117236) and led by Prof. Patrick Kelly (Univ. of Minnesota). It will develop two state of the art robotic telescope facilities at Magdalena Ridge Observatory, New Mexico (USA) and at Skinakas Observatory (Greece) a common research infrastructure of the Univ. of Crete and FORTH. At each site, TURBO will consist of large-format CMOS detectors mounted on sixteen 0.25-meter diameter optical tube assemblies. Within two seconds of a trigger alert, TURBO will start to obtain continuous, multi-band imaging of over ~150 square degrees.

By searching more quickly than existing facilities, the telescopes will identify new, brightening sources on the sky and obtain early data. The project will also monitor nearby galaxies for very young supernovae. Students from the University of Minnesota and New Mexico and Univ. of Crete as well as the citizen scientists will participate.

Prime candidates to be followed will be mergers of black holes or neutron stars creates gravitational waves. Mergers that lead to explosions also emit light, which conveys information about the heavy elements they create. Since 2015, astronomers have recorded the gravitational waves from nearly 100 mergers. However, light from only a single merger has been clearly pinpointed. Counterparts to gravitational-wave detections of mergers will multiply the information available from the gravitational waves alone by revealing the mergers’ distances, environments, and nucleosynthetic products. Given its unique sensitivity to prompt emission, TURBO may detect novel types of counterparts, yielding potential insights, for example, into the poorly understood observed population of binary black-hole mergers. Observations of supernovae in nearby galaxies at the time of explosion (4-6 each year) can be expected to provide new understanding of their stellar progenitor populations and explosion mechanisms.