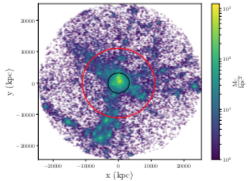 The properties of the largest structure in the Universe (galaxy clusters and superclusters) respond to the contents of the Universe - dark matter and dark energy. For this reason, the properties of these largest structures on the largest possible non-expanding scale (the so-called turnaround scale, which is the boundary between a structure and the expanding universe) can be used to obtain information about the contents of the Universe, and the relative proportions of its dark constituents. In contrast to other probes of cosmology, such as the cosmic microwave background of the expansion history of the Universe, the turnaround scale of structures probes dark energy locally - here and today - and it maps its result on specific objects (say a galaxy cluster, or a supercluster) rather than on the Universe as a whole. Our group uses analytical and semi-analytical calculations, numerical simulations of cosmological volumes, and observations, to map the turnaround scale and obtain the information it encodes about cosmology.