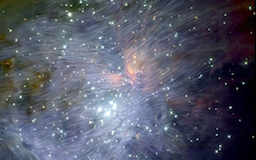 The process of the formation of stars, the building blocks of galaxies, from rarified gas lies at the foundation of modern astrophysics. Star formation is a complex physical process, which has operated over most of cosmic time and is not yet fully understood. While the study of star formation is a fundamental and exciting topic on its own, the development of a predictive theory of star formation is essential for many other fields, like galaxy formation and evolution and cosmology.

The raw material out of which stars are formed exists in the space between stars, which is not empty. Rather, it consists of gas (mostly hydrogen, with about 25% by mass helium and traces of heavier elements), dust grains, cosmic rays, and it is permeated by magnetic fields and photons. These ingredients are collectively referred to as the interstellar medium (ISM). The ISM is not uniform: it exhibits a wide range of densities. ISM condensations are known as interstellar clouds. Newborn stars are observed in the densest, coldest of these clouds. In these stellar nurseries the bulk of hydrogen gas is in molecular form – hence the name molecular clouds.

We study the physics of the molecular clouds in order to understand the initial conditions of star formation. We focus on the role of magnetic fields that we study observationally (through the polarization of star light that traces the plane-of-sky magnetic field) and theoretically via the use of magnetohydrodynamic simulations. Our group uses observational data in the Infrared part of the electromagnetic spectrum from space-based (Planck, Herschel) and airborne-based (SOFIA) observatories; in the radio from single dish telescopes (ARO, FCRAO, Arecibo, Effelsberg) and in the optical at Skinakas Observatory (RoboPol).

For the numerical simulations we use MHD codes such as (FLASH and RAMSES).