Though every planet in our solar system has been visited by spacecraft over nearly the past 60 years, the outer frontier of the solar system, beyond Neptune, has been barely explored. There is circumstantial evidence that a planet five times Earth's mass – dubbed Planet Nine – may be lurking out there in the abyss. If real, it is creeping along a very wide orbit taking it 800 times farther from the Sun than Earth is. Though astronomers have yet to find this legendary world – if it exists at all – they have found another clue 336 light-years away. 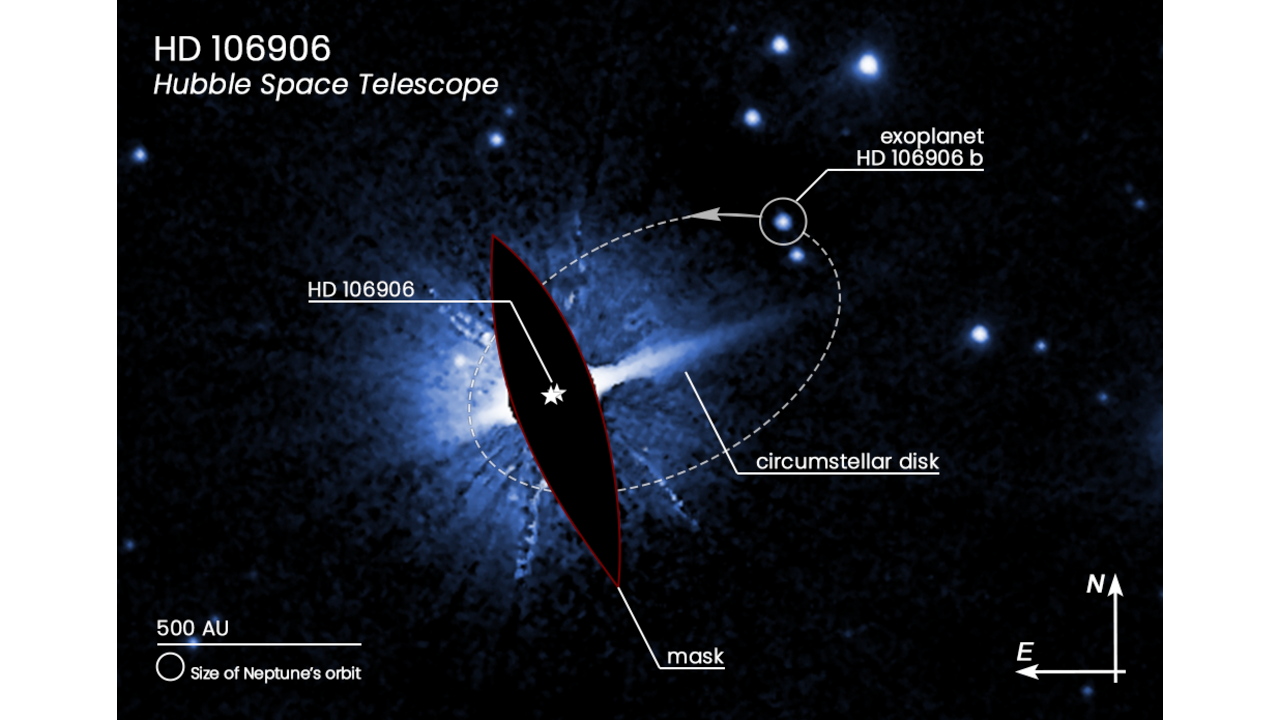 Astronomers, including Paul Kalas of the Univ. of California Berkley and affiliated scientist at the Institute of Astrophysics - FORTH, analyzing Hubble images of the double star, HD 106906, have discovered a planet in a huge 15,000-year-long orbit that sweeps it as far from its stellar duo as Planet Nine would be from our Sun. This is observational evidence that similarly far-flung worlds may exist around other stars. Researchers hypothesize that the planet wound up there in a game of planetary pinball where the gravitational pull of a passing star modified the orbit's shape. Perhaps a passing star had a similar influence on our solar system 4.6 billion years ago.

A planet in an unlikely orbit around a double star 336 light-years away may offer a clue to a mystery much closer to home: a hypothesized, distant body in our solar system dubbed "Planet Nine."

This is the first time that astronomers have been able to measure the motion of a massive Jupiter-like planet that is orbiting very far away from its host stars and visible debris disk. This disk is similar to our Kuiper Belt of small, icy bodies beyond Neptune. In our own solar system, the suspected Planet Nine would also lie far outside of the Kuiper Belt on a similarly strange orbit. Though the search for a Planet Nine continues, this exoplanet discovery is evidence that such oddball orbits are possible.

"This system draws a potentially unique comparison with our solar system," explained the paper's lead author, Meiji Nguyen of the University of California, Berkeley. "It's very widely separated from its host stars on an eccentric and highly misaligned orbit, just like the prediction for Planet Nine. This begs the question of how these planets formed and evolved to end up in their current configuration."

The system where this gas giant resides is only 15 million years old. This suggests that our Planet Nine—if it does exist—could have formed very early on in the evolution of our 4.6-billion-year-old solar system.

The 11-Jupiter-mass exoplanet called HD 106906 b was discovered in 2013 with the Magellan Telescopes at the Las Campanas Observatory in the Atacama Desert of Chile. However, astronomers did not know anything about the planet's orbit. This required something only the Hubble Space Telescope could do: collect very accurate measurements of the vagabond's motion over 14 years with extraordinary precision. The team used data from the Hubble archive that provided evidence for this motion.

The exoplanet resides extremely far from its host pair of bright, young stars—more than 730 times the distance of the Earth from the Sun, or nearly 68 billion miles. This wide separation made it enormously challenging to determine the 15,000-year-long orbit in such a relatively short time span of Hubble observations. The planet is creeping very slowly along its orbit, given the weak gravitational pull of its very distant parent stars.

The Hubble team was surprised to find that the remote world has an extreme orbit that is very misaligned, elongated and external to the debris disk that surrounds the exoplanet's twin host stars. The debris disk itself is very unusual-looking, perhaps due to the gravitational tug of the wayward planet.

How Did It Get There?

So how did the exoplanet arrive at such a distant and strangely inclined orbit? The prevailing theory is that it formed much closer to its stars, about three times the distance that the Earth is from the Sun. But drag within the system's gas disk caused the planet's orbit to decay, forcing it to migrate inward toward its stellar pair. The gravitational effects from the whirling twin stars then kicked it out onto an eccentric orbit that almost threw it out of the system and into the void of interstellar space. Then a passing star from outside the system stabilized the exoplanet's orbit and prevented it from leaving its home system.

Using precise distance and motion measurements from the European Space Agency's Gaia survey satellite, candidate passing stars were identified in 2019 by team members Robert De Rosa of the European Southern Observatory in Santiago, Chile and Paul Kalas of the University of California.

In a study published in 2015, Kalas led a team that found circumstantial evidence for the runaway planet's behavior: the system's debris disk is strongly asymmetric, rather than being a circular "pizza pie" distribution of material. One side of the disk is truncated relative to the opposite side, and it is also disturbed vertically rather than being restricted to a narrow plane as seen on the opposite side of the stars.

This scenario for HD 106906 b’s bizarre orbit is similar in some ways to what may have caused the hypothetical Planet Nine to end up in the outer reaches of our own solar system, well beyond the orbit of the other planets and beyond the Kuiper Belt. Planet Nine could have formed in the inner solar system and been kicked out by interactions with Jupiter. However, Jupiter—the proverbial 800-pound gorilla in our solar system—would very likely have flung Planet Nine far beyond Pluto. Passing stars may have stabilized the orbit of the kicked-out planet by pushing the orbit path away from Jupiter and the other planets in the inner solar system.

"It's as if we have a time machine for our own planetary system going back 4.6 billion years to see what may have happened when our young solar system was dynamically active and everything was being jostled around and rearranged," said Kalas.

To date, astronomers only have circumstantial evidence for Planet Nine. They've found a cluster of small celestial bodies beyond Neptune that move in unusual orbits compared with the rest of the solar system. This configuration, some astronomers say, suggests these objects were shepherded together by the gravitational pull of a huge, unseen planet. An alternative theory is that there is not one giant perturbing planet, but instead the imbalance is due to the combined gravitational influence of multiple, much smaller objects. Another theory is that Planet Nine does not exist at all and the clustering of smaller bodies may be just a statistical anomaly.

A Target for the Webb Telescope

Scientists using NASA's upcoming James Webb Space Telescope plan to get data on HD 106906 b to understand the planet in detail. "One question you could ask is: Does the planet have its own debris system around it? Does it capture material every time it goes close to the host stars? And you'd be able to measure that with the thermal infrared data from Webb," said De Rosa. "Also, in terms of helping to understand the orbit, I think Webb would be useful for helping to confirm our result."

Because Webb is sensitive to smaller, Saturn-mass planets, it may be able to detect other exoplanets that have been ejected from this and other inner planetary systems. "With Webb, we can start to look for planets that are both a little bit older and a little bit fainter," explained Nguyen. The unique sensitivity and imaging capabilities of Webb will open up new possibilities for detecting and studying these unconventional planets and systems.

The team's findings appear in the December 10, 2020 edition of The Astronomical Journal.

The Hubble Space Telescope is a project of international cooperation between NASA and ESA (European Space Agency). NASA's Goddard Space Flight Center in Greenbelt, Maryland, manages the telescope. The Space Telescope Science Institute (STScI) in Baltimore, Maryland, conducts Hubble science operations. STScI is operated for NASA by the Association of Universities for Research in Astronomy, in Washington, D.C.